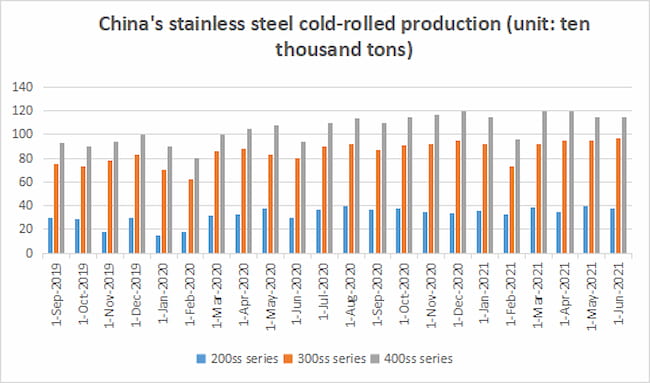 3. China's steel output from January to April was 453 million tons, a year-on-year increase of 20.1%

In June, the output of the 300-series row increased slightly. At present, the profit of the 300-series production is acceptable, and the demand is good. There are varying degrees of shortages in the northern and southern regions. At present, the business of steel mills is rising. The orders in June have already been received, and some orders have been received in July.

In June, the output of the 400 series cold-rolled row fell more significantly. The most obvious drop is JISCO , which is mainly affected by year-end equipment overhaul. The overhaul period of this plant is from late May to mid-June. This overhaul will start with steel making and hot rolling. The cold rolling production is expected to end in the mid-June Equipment overhaul. According to the current production situation of the plant, the output of the 400 series is greatly affected, and the output of the 300 series is limited. In addition, other steel mills have also made slight production cuts due to the impact of reduced profits.